A Bit About Tucker GA

The City of Tucker is located in two counties: DeKalb County & Gwinnett County.
The population was 27,581 at the 2010 Census.Although central Tucker, also known as "Main Street Tucker", is laid out as a planned "railroad town," it has never been formally incorporated.

Municipal services such as fire, police, water, and schools are provided by DeKalb County. If incorporated, Tucker would be the second largest city in the county after Dunwoody (excluding Atlanta which is mostly in Fulton County).

The City has been designated with its own ZIP code of 30084.

Brad Weiner - North Atlanta Home Team
Allow me to introduce myself. I am Brad Weiner and I work 24 / 7 as a Broker, Realtor and Business Owner at REALTY ON MAIN. We are a small group of agents that work in a professional manner to sell homes in the North Atlanta area of Georgia. Feel free to call, email or stop by our Real Estate Office located in downtown Alpharetta on Main Street. Feel free to visit www.NorthAtlantaHomeTeam.com for all your Real Estate needs. 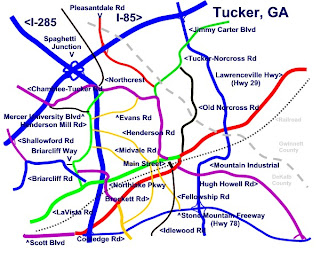